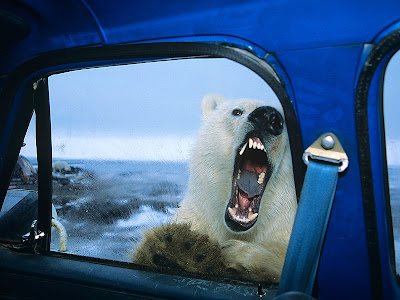 Why would you not want to go to the Arctic? It’s not scary at all.

Last night I had another major parent fail. I was reading my kid a bedtime story called Snow Bear. It’s about a polar bear and an Eskimo girl who whoop it up together on a huge iceberg-like-thing in the Arctic.

After the story, my kid says, “I don’t ever want to go to the Arctic.” I ask him why and he says because the animals there will eat him. And it’s super duper cold. It was at this point in the conversation that I made a very poor decision. I said:

“Well, too bad I booked that flight to the Arctic tomorrow for you. Oh well.”

Maybe not the best thing to say right before bed and when he’s been going through a killer round of separation anxiety over the past few days.

So for the next 20 minutes, this is what I hear: “I DON’T WANT TO GO TO THE ARCTIC!” Very loudly. With a bit of crying mixed in.

Sigh. I guess sometimes I’m not as hilarious as I think. Just terrifying.